People for Peace: Supporting victims of sexual abuse in the Democratic Republic of the Congo

by MONUSCO
in crop, Food
Reading Time: 4 mins read
A A
0


The eastern DRC has experienced conflict and instability over many years and many people have been forced to flee their homes making them more vulnerable to exploitation.

Delu Lusambia is the project manager and coordinator of SYAM, (which stands for Siku ya Mazingira in Kiswahili), a local civil society organization in eastern DRC which implements projects for the UN Trust Fund in support of victims of sexual exploitation and abuse.*

“My organization, SYAM, has been working on the issue of sexual exploitation and abuse by UN personnel since 2007. Around that time, many people in the DRC were internally displaced because of conflict and took refuge near MONUSCO camps in North Kivu and eastern provinces.

They were left without jobs, without any means to sustain their lives. As a result, many women and girls exchanged sexual favours with UN peacekeepers for money and food. Economic vulnerability and power imbalances can expose people to the risk of sexual misconduct.

From 2007 to 2016, SYAM conducted surveys and heard many testimonies about sexual exploitation. We shared the result of the surveys and proposed projects to support and empower women and girls in partnership with MONUSCO.

We realized the urgent need to support victims, especially those who had children born of sexual abuse by peacekeepers.

A UN peacekeeping patrol passes people on the road in the Beni region in eastern of the Democratic Republic of the Congo.

That is why we created vocational training centres for women and girls where we train them in pastry-making, tailoring, bread-making, hairdressing, and agriculture.

I am proud of the impact that we are making. First, from our observation on the ground, occurrences of sexual exploitation and abuse have decreased. Also, a large number of beneficiaries have been trained through our projects. I am delighted that a total of 375 beneficiaries between 2020 and 2021 have gained vital skills to sustain their lives.

We are also witnessing changes in the culture and attitudes. SYAM works with local community networks to raise awareness within communities in eastern DRC about sexual exploitation and abuse and how to report these wrongs. Now the reporting of such cases has become a common practice. Whenever they see suspicious activities, the communities speak up to raise concerns with MONUSCO.” 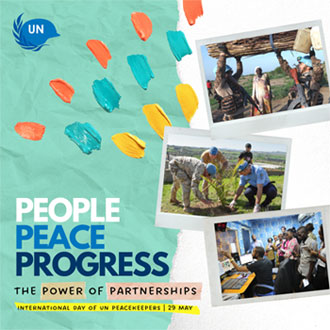 * Trust Fund projects are funded by 24 UN Member States and implemented in partnership with development actors, including United Nations agencies and civil society.

More than one million peacekeepers have served under the UN flag, but they are not alone in the pursuit of peace. Peacekeeping is powered by strong and diverse partnerships, a theme which is highlighted in this year’s International Day of Peacekeepers.

Shocks and vulnerability to poverty in middle-income countries

The baby formula shortage is prompting calls to increase support for breastfeeding : NPR

The baby formula shortage is prompting calls to increase support for breastfeeding : NPR